Cocoa Puff's first day home was filled with lots of smiles.  Monkey loved having mom and dad home, but he wasn't too sure if this new sister was going to bring joy to our home or not.  He could see that we were happy, and in turn that made him happy.  But he also quickly noticed that our time was very divided and became extra clingy.  All things we completely expected and prepared for.  I'm so thankful that he never got to a point that he absolutely didn't like his sister.  He was never mean to her, by any means.  He would just pretend she wasn't there...his way to cope with the change.  He didn't want to touch her or hug her or take a picture with her (which is evident in the photos =) but he was always gentle.

Our Lil Lady's world was rocked (obviously).  Although she really took things in stride, we put a lot of effort into keeping her world small and familiar.  Since her surroundings were brand new, we kept mostly to the toys we had taken to Ethiopia with us.  We dressed her in clothes she had already seen and she slept in the same blanket she did in Ethiopia.  As long as we were in eye shot, she did very well.  We made sure one of us stayed right with her and never walked out of the room.  This may sound extreme to some of you...but if you remember that we are now her 5th caregivers in 6 short months you'll realize that this was completely necessary for her to develop a bond and trust with us as her parents.

So how were mom and dad doing?  Well, we are jet-lagged, sleep-deprived, climbed on, poked at, and laughed at.  We haven't taken a shower or brushed our teeth.  Our meals are consisting of anything my mom left in the fridge, cookies, and frozen meals that I thankfully prepared ahead of time.  Coffee has become a necessity instead of a luxury.  We have four suitcases to empty, launder, and clean (one of which has applesauce covering every diaper, article of clothing, and piece of paper).  So in one word??  GREAT!  =)
God has abundantly blessed us and we are SO thrilled to be home and well and to have our family in tact!  Thank you for all the continued prayers!!!

...Daddy and I turned on our Flip video camera (a gift from all daddy's siblings for our birthdays) to record the first time our family of four would be TOGETHER!  Then we turned around and headed up the next set of escalators...and as soon as we did, we could hear the voices of our family...and most importantly, of your big brother!!!  I called his name and beamed a HUGE smile as I saw him standing at the top of the escalator waiting for us!  Friends and family were squealing with delight at seeing you for the first time.  It was an indescribable feeling.  The first thing I did was give your brother a great big hug!  Of course he was more interested in his cookies from grandma at the moment to pay you much attention...but how much can you really expect from a two-year-old, right?!?  Grandma and Grandpa were there, aunts and uncles, and several adoption families...all there to welcome you home!!!  Several of them were holding up signs and there were cameras flashing and video cameras rolling...all to help us remember this day.  For each of them I am so grateful.  Your eyes were wide as you took it all in, but you didn't once cry.  I can only imagine how it must have felt to be surrounded by unfamiliar faces and voices leaning in close and reaching for hugs. 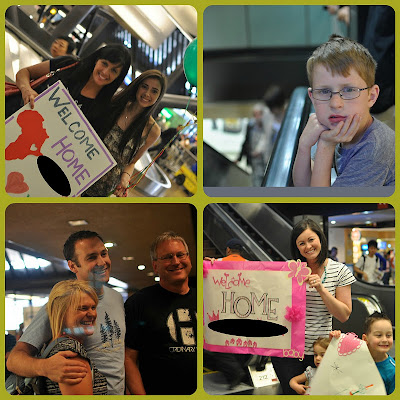 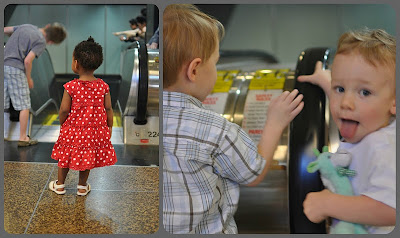 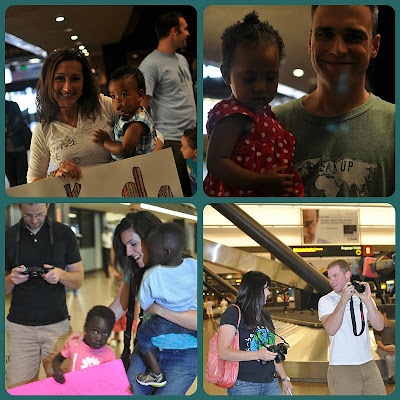 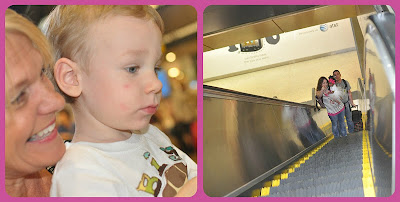 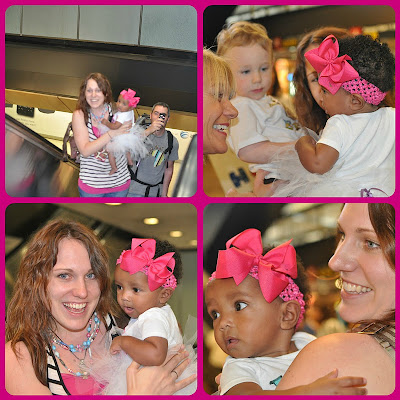 Once everyone had an opportunity to meet you, the stories started coming out.  Collisions on the freeway that almost prevented family from making it in time.  The sweet lady who had sat behind us on the plane had come up just minutes before us and said, "I know who you're waiting for...and she's beautiful!!!"  Also, people were coming up the escalator from the train in groups and they had timed it out...so after the group had come up my dad ran to the bathroom...but that was when we had paused to start the Flip so he JUST missed us coming up (but was there a moment later...I think one of my brothers ran to get him). 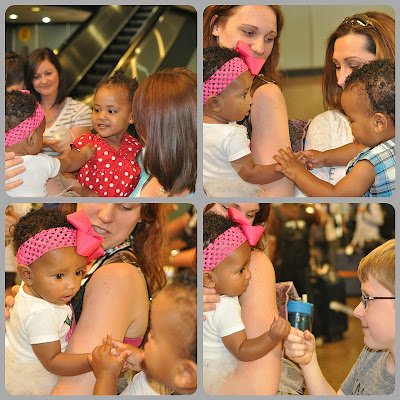 Once Monkey had calmed down a bit, we told him that you had a present for him!  He was very excited and came running over...and he had a present for you as well!  He brought out a pink teddy bear for you (that Grandma said he picked out ALL BY HIMSELF and was VERY proud of it) and we gave him the KLM plane we had bought for him in Amsterdam (but gave you all the credit love =).  He was so excited and thanked you for it! 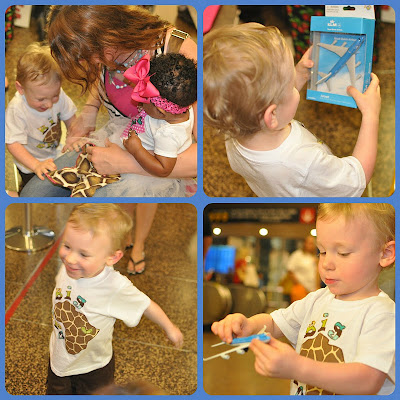 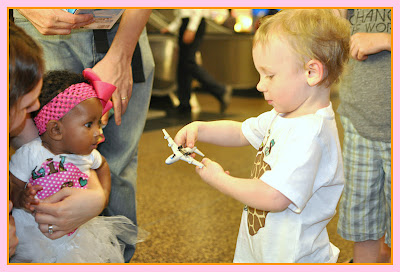 My siblings parted ways with their littles...they left to go pick up food and bring it to our house for us (after I had mentioned we were once again STARVING).  Our AGCI mama's stopped for a group picture, and daddy and Grandpa went and found our luggage while we mingled with family.  Several times Grandma hugged me just crying....and I cried too! =)  Big brother was starting to melt down so for a while I was holding both of you and just BEAMING....my babies TOGETHER in my arms!!!

My mom had driven our car to the airport so that we wouldn't have to move all the car seats.  But being that we were so tired, we decided to have mama hop in the back between the kids while she drove (plus you had never been in a car seat...so I'm sure it would help having mama right there).  A couple friends helped us carry all the luggage out.  Stepping outside the airport it was definitely cooler that Ethiopia...but warmer than I would have thought (looking back it WAS July...it had just been so dang cold so far).  I kept you under a blanket just in case, but you kept pushing yourself upright to see what was going on.
Daddy buckled you in the car seat for the first time and you were NOT all that thrilled with it.  Mommy quickly hopped in the seat in between you and your brother and fed you a bottle and you seemed to calm down.  Within minutes you were quiet, but still full of that wide-eyed concern.

Driving home, I once again was filled with a bit of culture shock.  Everyone seemed in a hurry to get somewhere.  Time seemed to be swirling at crazy speeds around me, but in our car, with my family...time seemed to stand still.  Don't get me wrong...I couldn't wait to get out of that cramped back seat and be in our home....but I was overflowing with SO much joy!  Our family was finally whole!  I still couldn't believe I was sitting between my two babies!!!  Grandma and daddy were chatting it up in the front seat and big brother was next to me talking my ear off about what he did that week.  I hardly heard a word though...that sounds bad to say, but it's the truth!  I just looked from one person to another and beamed from ear to ear! 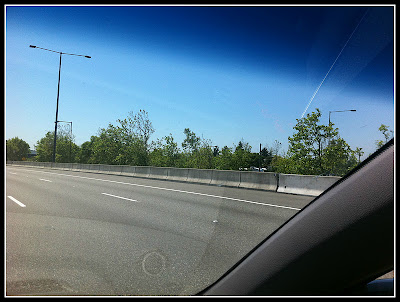 When we arrived at home, our porch was covered with "It's A Girl" streamers, and fresh African Daisies, and pink balloons!  As we pulled into the driveway, my brother walked outside with his iphone and started videoing (thank GOODNESS for family)!  Monkey was ready to get out right away, but I asked Grandma to snap our picture before we took you inside. 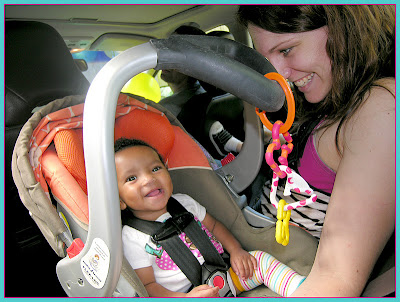 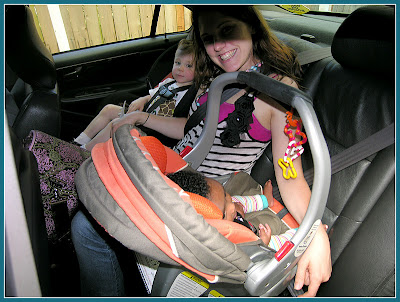 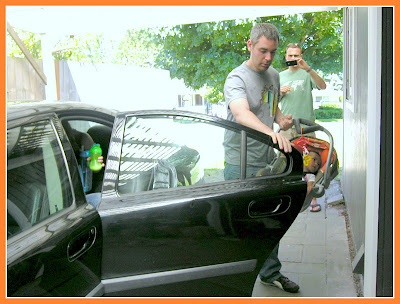 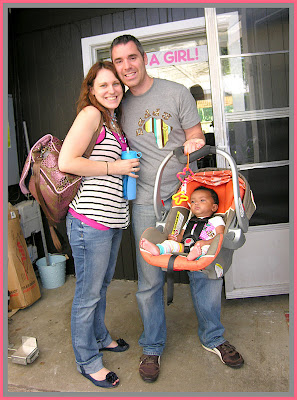 Walking inside was a surreal feeling.  Something I had dreamed about for so long.  Our family was respectful of this intimate moment...one camera on us to make sure we didn't miss this moment, but the rest of them were in the other room or outside to give us our space.  We unbuckled you from your car seat and you were full of smiles instantly.  You hardly seemed to notice your surroundings...you were just thrilled to be free...and at least you had a couple familiar faces (even though you hadn't met your big brother before today...I know you stared at pictures of him for the last month).  Big brother went to his toys right away, so we gave you a tour of your new room!  You were overwhelmed, most definitely...but you went with the flow of things. 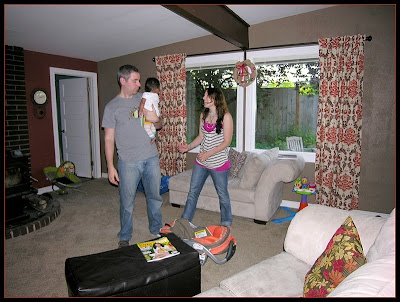 At this point I was very thankful our family picked up Subway because my stomach was growling.  We joined them by the table eating and you seemed very excited to get to know your new cousins!  And they were all fascinated with you!


I don't remember much else about this day...in all honesty it was a bit of a blur.  The sun was shining outside and my heart reflected the warmth.  As family started to leave, daddy and I showed Grandpa and Grandma some pictures and videos of our trip.  Grandpa and daddy were starting to nod off in the living room and I seemed to have a sudden burst of energy so Grandma and I decided to take the kids walking.  I wore you in the Moby and Grandma pushed big brother in the stroller.  We did a small loop and by the time we came home, both of you had fallen asleep...and Grandpa and daddy were both zonked out too.  Grandma and I sat  chatting in the backyard with the warmth of the sunshine on us.  And I remember being really excited when we checked the mail because I got your 4th of July bow!  =)

How do you describe pure and utter joy?  My heart feels like its going to implode.  Thank you Jesus for my beautiful family!

For the much-loved photography! Photos in header by Cassie Van Boven Photography.